Archaeology of the Middle East and North Africa from Late Antiquity to the Ottoman period. Second series: Iraq & Arabian Peninsula

As part of the webinar series Archaeology of the Middle East and North Africa from Late Antiquity to the Ottoman period, the Ifpo, the CEFREPA and Udine University are pleased to announce the second series of meetings that will focus on Iraq and Arabian Peninsula and will take place from November, 2022, to July, 2023.
The goal of this series of conferences is to bring together specialists working on a broad region extending from North Africa to the Middle East and focusing on the period from Late Antiquity to Modern era. The first series focused on archaeology and material culture of Lebanon and Jordan. The webinar is open as widely as possible and aims to gather together archaeologists working on this large area as well as students. The second series, focusing on Iraq and Arabian Peninsula, will present, on the one hand, ongoing projects and, on the other hand, comparative data and synthesis studies, which will allow to frame this region into a broader historical and geographical context. 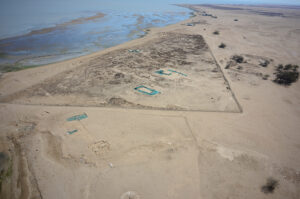 The paper aims to present the Kuwaiti-Italian archaeological project carried on in the site of Al-Qurainiyah on Failaka Island, were an early Islamic settlement was found. Building and a work shop has been investigated and a large amount of pottery has been collected during 10 years of work in the field. Ceramics from archaeological stratigraphy seem to indicate an occupation of the area as an harbour as early as the Late Hellenistic period, with an intensive and well-organized occupation between the end of seventh century and the beginning of the ninth century AD. This lecture aims to present the topography of the site and some preliminary results from the comprehensive analysis of all the finds excavated at the site of Qurainiyah between 2010 and the latest 2019 campaign. On this occasion we shall discuss the Early Islamic domestic –mainly ceramic– assemblage from the 8th and 9th century houses, stressing possible uses and provenance of pottery.

Dr. Elisa Laschi (Rheinische Friedrich-Wilhelms-Universität Bonn): Master’s degree in Classical Archaeology with fifteen years of experience in excavations and projects of research, PhD Candidate at the Rheinische Friedrich-Wilhelms-Universität Bonn.  She took part to many archaeological excavations in Italy and the Middle East (Jordan and Kuwait), dealing with excavation, documentation and study of findings. Her research interests are ancient pottery (from Central Italy and the Near and Middle East) and the transformations of cult places occurring in Italy during after the romanization. She is part of the Italian Archaeological Mission to Failaka (State of Kuwait), as lab supervisor. 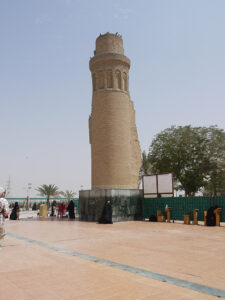 The remaining corner tower of the Great Mosque of Basra, Andrew Petersen

Although the significance of Basra to early Islamic civilization is well known the physical remains of the site and its location are poorly understood despite extensive historical information and considerable archaeological fieldwork carried out at the site. There are many reasons for this situation including in recent times the conflicts surrounding the Iran-Iraq war, the 1990 Gulf War and the 2003 invasion of Iraq all of which had a significant impact on Basra. Other reasons for the limited understanding of the site include the relatively small number of historical standing buildings and the complex topography of the site. Despite these problems there is now a considerable amount of data which can provide the basis for understanding the origin and development of this remarkable city. This talk will review the results of three seasons of fieldwork in Basra using archival research, aerial photogrammetry, surface survey and geo-archaeological investigations. The research provides a number of valuable insights into the development of the early Islamic city although it also highlights dangers to the city through rapid development over the site of the early Islamic city.

Prof. Andrew Petersen is Director of Research in Islamic Archaeology at the University of Wales Trinity Saint David. He studied medieval history and archaeology at St.Andrews followed by an MPhil in Islamic Architecture at Oxford. His PhD at Cardiff University concentrated on the development of urban centres in medieval and Ottoman Palestine. He has worked in and carried out research in a number of countries of the Middle East and Africa including, Jordan, Iraq, Palestine, Turkmenistan, the UAE, Oman, Syria, Qatar, Kenya and Tanzania. He has also worked in British archaeology with a speciality in recording standing buildings. He is a Member of the Institute for Archaeologists and a Fellow of the Royal historical Society. He has published a number of books on different aspects of the architecture and archaeology of the Islamic world including most recently an edited volume on Ramla in collaboration with Denys Pringle.