Archaeology of the Middle East and North Africa from Late Antiquity to the Ottoman period. First series: Lebanon & Jordan

As part of the webinar series Archaeology of the Middle East and North Africa from Late Antiquity to the Ottoman period, the Ifpo is pleased to announce the first series of meetings that will focus on Lebanon and Jordan and will take place every two weeks during the year 2021 (January-July & September-December).

The goal of this series of conferences is to bring together specialists working on a broad region extending from North Africa to the Middle East and focusing on the period from Late Antiquity to Modern era. As the current pandemic is forcing us to reinvent ways of communicating and sharing our work, a webinar would be an opportunity to reconnect the academic community of researchers working on this field. It is open as widely as possible and aims to gather together archaeologists working on this large area as well as students.

While other regions will be addressed in the following cycles, this first series focuses on archaeology and material culture of Lebanon and Jordan. These meetings will present, on the one hand, ongoing projects and, on the other hand, comparative data and synthesis studies, which will allow to frame this region into a broader historical and geographical context.

Free access on registration for each session via this link : https://zoom.us/meeting/register/tJwqcO2przkiH9ZoNZohNh0Vtd-Kkeud7_HE

PROGRAM (from January to June) 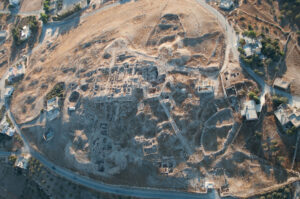 Abstract
The recent “rural turn” in Islamic archaeology is nowhere more evident than in the rapidly growing interest in the Middle Islamic period in Jordan. The 13th-14th centuries CE is a rich time culturally and historically. Having documented the Mamluk-era phases of construction and reuse of the Crusader and Ayyubid castles, archaeologists are now turning to the extensive archaeological remains of rural settlements to reconstruct daily life in small communities. As most of what stands above ground is Mamluk in date, and the Citadel and village houses are quite well preserved, the site of Tall Ḥisbān has become the type-site of this period in Jordan.

This lecture will summarize the rather surprising results of the last two decades of fieldwork at this site, and what light it sheds on such issues as rural revival, peasant migration, agrarian knowledge and crafts, family life, and the relationship between Jordanian villages and the Mamluk state.

Bethany Walker (PhD 1998, University of Toronto, Middle Eastern Studies) is a Research Professor at the University of Bonn, where she holds the Chair of Mamluk Studies and directs the Research Unit of Islamic Archaeology in the Department of Islamic Studies. She was also the co-director of Bonn’s Annemarie Schimmel Kolleg, a Center for Advanced Research in Mamluk Studies. A historically trained archaeologist and Arabist, Walker directs multiple archaeological projects in Jordan and abroad, including the excavations at Tall Ḥisbān. Prof. Walker is founding editor of the Journal of Islamic Archaeology, founding co-editor of Equinox’s Monographs in Islamic Archaeology, and co-editor of the recently published Oxford Handbook of Islamic Archaeology; serves on numerous American and French editorial boards; and is a long-time Board member of the American Center of Research in Amman. Her monograph Jordan in the Late Middle Ages: Transformation of the Mamluk Frontier was published by Chicago Press in 2011. She has worked in Jordan for over twenty years.

The Role of the Islamic Coins in Reading the History of a Site: Baalbak and Beirut as example

The medieval heritage of Anfeh and its neighbourhood (North Lebanon)

Crossing Medieval and Islamic Studies in Jordan. Medieval Petra and Shawbak in cc. 11-14: a Light Archaeology.

Ablution rooms of mosques in medieval Near East

Stephen McPhillips (Association for the Protection of Jabal Moussa)

July sessions will be announced soon