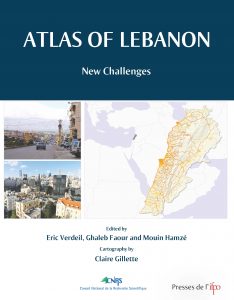 After fifteen years of reconstruction in a relatively peaceful environment spanning the years 1990 to 2004, Lebanon has experienced successive violent political events resulting from complex entangled internal and external struggles. The Syrian crisis and its political, economic and demographic consequences on Lebanon have increased these tensions. This atlas sheds light on these new challenges and adds new data that complete the analyses already published in the Atlas du Liban. Territoires et société (Atlas of Lebanon. Territories and Society) released in 2007 by the same research team. Some of its components are included in this edition. Beyond the international regional crisis and the population movements, it takes into account Lebanon’s socio-economic dimensions, the environmental issues linked to uncontrolled urbanization and to natural risks, as well as conflicts due to local territorial management.

This atlas is the result of a collaborative endeavor between French and Lebanese researchers. It uses a geographical approach that puts in the foreground a spatial analysis of social and natural phenomena. Public sources are scarce in Lebanon, especially at the local scale. They are sometimes less reliable and difficult to access. It is particularly the case for the Lebanese census data, conversely data are abundantly available on the refugees population, which is less known than the population of refugees. International data help compare Lebanon to its neighbors. Thematic data produced by some ministries are helpful to provide a detailed view regarding specific domains. Analyses processed on aerial and satellite images have produced essential data on urbanization and environment. Local thematic fieldwork surveys have provided additional data.

The book consists of seven chapters. The first one deals with the territorial state-building seen in the light of regional geopolitics, and emphasizes internal violence and the reemergence of militias and armed groups that fight each other and the state army. Lebanon is once again perceived as a territory divided between multiple allegiances. The second chapter is devoted to the analysis of population dynamics, despite the lack of reliable data whose sources are subject to discussion. It includes analyses of internal population flows, the Lebanese diaspora, and the assessment of Syrian refugees’ influx. The third chapter shows the fragility of the Lebanese economic model. Its dependency on foreign investments and on the remittances of the diaspora, as well as the deadlocks of industry and agriculture, which aggravate social imbalances. The fourth chapter is an assessment of urbanization in the country, which has increased by 80% in surface in twenty years at the expense of natural spaces and agriculture. The shore is highly coveted and widely artificialized and damaged. Multiple signs of environmental degradation are examined in chapter five. They seem to announce the global climate change and its local effects. In addition to that, there is a direct link between massive urbanization and many risks, measured and mapped in an increasingly detailed way. Chapter six tackles the dysfunctional public services that exploit natural resources: water and energy supply, both marked by massive shortages, and the management of solid waste hit by a serious crisis. The seventh and last chapter studies the mutations of the local territorial management, which is marked by the retreat of the state, if not its marginalization, and the rise of other actors, notably municipalities, local powers and also civil society organizations.