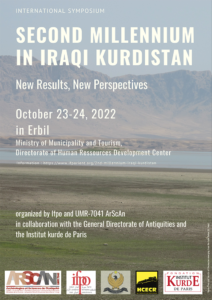 With the support of the General Directorate of Antiquities in Kurdistan

The increase of archaeological excavations in Iraqi Kurdistan since the mid-2000s has led to the discovery of more than twenty sites that have yielded remains dating to the 2nd millennium BC. These new data reveal a mixed picture. In the lowland areas, we observe the existence of local kingdoms, some of which were integrated into larger territorial structures, such as the Kingdom of Upper Mesopotamia formed by Samsi-Addu, Mittani and the Assyrian Empire by the end of the period. In the foothills, on the other hand, it is often challenging to recognize 2nd millennium levels: pottery is less well defined and, generally speaking, the history of these regions is less documented by textual sources.

An overview of knowledge acquired over more than 10 years in Iraqi Kurdistan seems to be necessary. Therefore, we invite the archaeological teams currently excavating sites dated to this period to propose papers that will allow an initial assessment to be made and some salient reflections to be identified, which will be able to highlight future avenues of research.

The orientations of this colloquium tend more particularly towards archaeological remains, dating and chronology, historical issues in the light of textual sources and studies of material culture as a whole. We draw attention on the will to address these questions in a global and integrative approach, and prefer to limit topics focusing on a particularly exclusive aspect.