Revisiting Arab-Islamic Intellectual Legacy in Times of Conflict and Crises 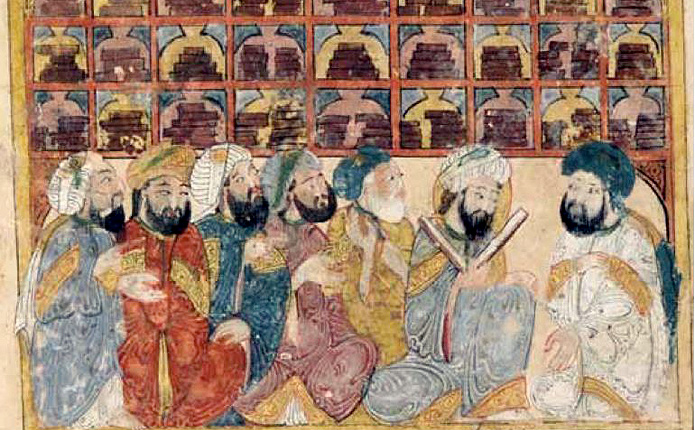 13-th century manuscript, drawn by Al-Wasiti of the celebrated book “The Assemblies” al-Maqamat of al-Hariri, shows a library in Baghdad

The French Institute of the Near East (Ifpo) introduces a new series of webinars/ seminars/ conferences: « Religions and Societies: Crossing  Perspectives ». These activities seek to explore the construction of political discourses on religious and social diversity in the Middle East and in Europe within a historical framework. This new series will be organized around two foci: the first on Arabic and Islamic intellectual heritage, and the second on  Islamic history in a comparative approach.

In the framework of  the first focus and thanks to a cooperation between The French Institute of the Near East- Ifpo (Jordan), The Royal Institute for Inter-Faith Studies- RIIFS (Jordan) & The Institute of Oriental Studies- ISO (Kosovo), this series of webinars/ seminars will explore certain works of Islam’s intellectuals mainly  in the classical period (900-1850 C.E.) (i. e. ِAl-Mawardi, Ibn Maymun/ Maimonides, Ibn Taymiyya, Şemseddin Sami Frashëri …) which strongly influenced their societies. However, this influence continued beyond their times to form enduring legacies. Modern and contemporary debates in the Arab and Muslim worlds, notably of the intellectuals of the Arab Nahda « renaissance » movement, have widely discussed these legacies since the middle of 19th century . A review of these contemporary debates clearly reveals the extensive interpreting, reinterpreting and dialoging of the intellectuals of Islam in the classical period and therefore stresses the importance of revisiting this intellectual legacy.

Therefore, this series of webinars/ seminars aims at scrutinizing one of the most persistent dichotomies which structures Islamic studies today and is related to Islamic intellectual history. This is the relationship between the « classical » and the « modern/ contemporary » which are often disconnected in the fields of Islamic studies. It places at its center the connection of classical Islamic thought on the one hand and its continuities/ legacies in the present represented by the scholarly work and debate in Arab and Muslim societies on the other hand. This multiple approach has as several objectives: i) attempt to construct, deconstruct, and/or reconstruct the intellectuals’ biographies to set aside the influence of ideology, mythology, and collective memory when interpreting the past; ii) explore the possible patterns (anachronism, disinheritance/negligence, selectivity, generalization, simplification, decontextualization, mythologization, legitimization of conflict, enmity etc..) of contemporary revisiting of the intellectuals’ legacies and their incentives in the cultural, social and political realms.

Join the seminar via this link

The questions of Secularism, Religion and National Pluralism within the Ottoman State 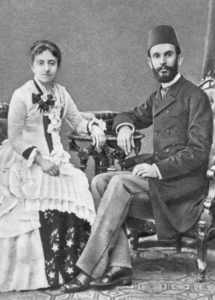 The session will focus on the intellectual legacy of the Albanian-Ottoman writer, philosopher and playwright Şemseddin Sami Frashëri, who lived in the second half of the nineteenth century. During this period  the Ottoman state experienced i) a political crisis after the constitution was suspended in early 1878, ii) an intellectual uncertainty due to the search for an alternative between “the developed” West and “underdeveloped” East, iii) the  emergence of national identities (Arabic, Kurdish, Armenian, Albanian, etc.), and collective identities (Turkish, Turanian, Ottoman, and Pan-Islamic unity) iv), the  development of the press as well as new literary types i, e, the theatre and the novel, contributed to the dissemination of new ideas in this context. Frashëri’s work is to be regarded as the basis of the Albanian Renaissance, as he was a pioneer in promoting national pluralism within the Ottoman state, in addition to his legacy in the field of education and the alphabet, as many of Albania’s famous high schools bear his name today. Frashëri’s work has been translated, reprinted and circulated widely and still influential and aspiring in Albania, the Balkans and Turkey.

Muhamed Mufaku Al-Arnaut holds a Ph.D in comparative literature and a Ph.D in modern history. Member of the Academy of Sciences in Kosovo and the Academy of Sciences in Bosnia. He worked at the University of Pristina/ Kosovo and at several Jordanian universities during 1974-2018. Al-Arnaut served as the director of the Institute of Oriental Studies- ISO 2018-2018 and he is now the editor-in-chief of ISO annual Journal “Oriental Studies”. Al-Arnaut was awarded the Medal of the Republic in 2012 for his overall work.