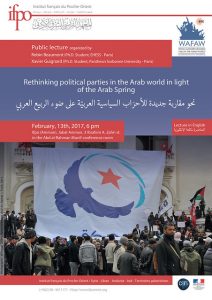 To be followed by a reception

Lecture Synopsis:
Abstract: In the wake of the 2011 Arab uprisings and their developments, many analyses have been produced. However, little analysis reflects upon the uprisings through the lens of political parties. The usual studies give preference to an analysis of processes of mobilization, where parties play only a marginal role. Researchers reflect upon such processes from the perspective that parties – with a strong emphasis on those labeled “Islamist” – prove to be nothing more than structures incapable of adapting to social change. Thus, their political role can be reduced to a mere “confiscation” of protest movements that can or should only be researched by an analysis of their participation in electoral processes. Contrary to this widely shared view, an in-depth analysis of political life in the region quickly shows the importance of parties in the social and political transformations at work in the region. From this perspective, the historical sequence that opened in 2011 not only makes parties key components of the political game, but also brings forward new research perspectives to whoever is willing to engage in such studies.

About the Speakers:
Robin Beaumont, a PhD student in Political Studies at the Paris-based School for Advanced Studies in the Social Sciences (EHESS). His research explores the reconfigurations of Shia political authority in post-2003 Iraq through a study of the structure of, and relationships between, the religious field, the Iraqi State, and the various Shia militias.
Xavier Guignard, a PhD student in Political science and adjunct at Paris Pantheon Sorbonne University, where he finishes a dissertation on Palestinian state-building and diplomacy. His research focuses on institution building and policy making in a colonial and authoritarian context. He previously taught at Abu Dis University (Palestine) and Sciences Po Paris (France).