Lecture : Between Ottomanism and Arabism: Jordan in the First World War (17/05/17) 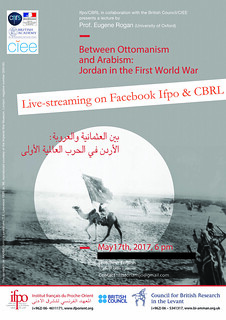 The Great Arab Revolt stands as one of the foundation stones of the Hashemite Kingdom of Jordan.  Yet a century ago, the First World War proved very divisive to the society of Ottoman Transjordan.  Drawing on Ottoman documents and local memoirs, Professor Eugene Rogan examines the way townspeople and tribesmen were caught in a conflict of loyalties between Ottomanism and Arabism.

Eugene Rogan is Professor of Modern Middle Eastern History at the University of Oxford, where he serves as Director of the Middle East Centre, St Antony’s College.  He is author of Frontiers of the State in the Late Ottoman Empire: Transjordan, 1850-1921; The Arabs: A History; and The Fall of the Ottomans: The Great War in the Middle East, 1914-1920.

This event is by personal invitation only at British Council, Amman