Lecture: Ottoman-British Rivalry and its Effects on the Mandaean Community in Iraq (21/05/17) 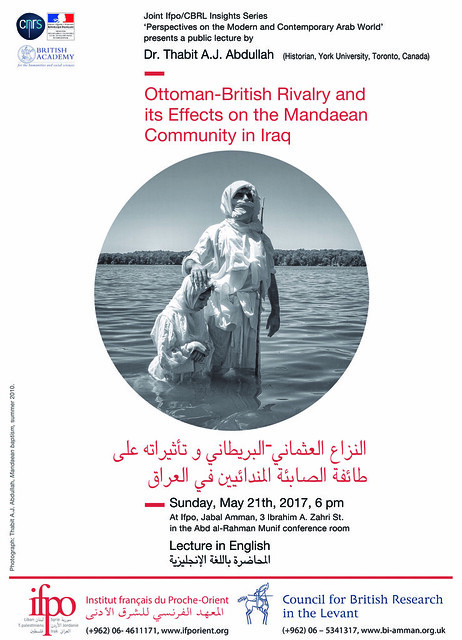 Throughout Ottoman times, the Mandaeans, a small gnostic community with roots going back to ancient Babylon, had strived to live without attracting much attention, amongst the Shi’i tribes of southern Iraq. Yet, in 1895, their head priest was accused of playing an important role in a major tribal rebellion against Ottoman authority. Using archival sources along with Mandaean oral tradition, this study analyzes this case within the context of state centralization, Ottoman-British rivalry in the region, and the resultant internal struggles within the small Mandaean community. The case is significant in that it sheds light on the impact that large-scale transformations had on vulnerable minorities like the Mandaeans, and the way that these communities struggled to survive in turbulent times.

Thabit A.J. Abdullah received his PhD in history in 1992 from Georgetown University in Washington, DC. He is currently a Professor of Middle East History at York University in Toronto, Canada. Prior to this he held positions of Assistant Professor and Director of the Middle East Studies Program at the American University in Cairo (1992-1996), Assistant Professor of History at Oklahoma State University, and Associate Dean for External Affairs at York University. His chief academic interests are medieval and early modern social and economic history of Iraq. He has, nevertheless, also published on modern and contemporary Iraq. Among his publications are Merchants, Mamluks and Murder: the Political Economy of Trade in 18th Century Basra (SUNY Press, 2000); Dictatorship, Imperialism and Chaos: Iraq Since 1989 (Zed Books, 2006); A Short History of Iraq: From 636 to the Present, 2ndedition (Pearson-Longman Books, 2010); in addition to several articles.