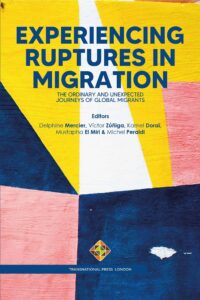 The Ordinary and Unexpected Journeys of Global Migrants

This book aims to portray migratory experiences, documented in the form of biographical narratives. We are interested in the dynamic aspect of migration, which effectively becomes a complex trajectory, made up of stages, returns, and circulations and no longer simply, as in the industrial era, a bipolar exile (there and here). In these complex and dynamic movements, many trajectories become bifurcations, by which we mean shifting fates. In these stories we found paths, events, and bifurcations, all combined together, in terms of biographical construction based on accumulated experiences. These narratives are both very banal and very unusual journeys, portraying a new international human globalization. They are simultaneously stories of barriers to be crossed in chaotic situations interspersed with peaceful events in quiet contexts. These journeys reveal not only the weight of migration policies, but also the certification policies implemented and developed by various countries.

This book presents itineraries, social logics of mobility; the routes become the analysts. If statistics record regularities, the personal approach captures specificities that produce meaning and contribute to a reinterpretation of current forms of mobility.

Part One: Migrant Families and Their Re-configuration

Part Three: From Adventure to Waiting: Emancipation of Restricted Trajectories

Part Four: From Expatriate to Migrant?

Robin CAVAGNOUD, a socio-demographer, is a Professor of Sociology in the Social Science department of the University Pontificia Universidad Católica del Perú (PUCP) in Lima and works with the Enfance et savoir dans les Andes (ENSAA, Children and wisdom of the Andes) of the Population Environment and Development Laboratory (LPED, UMR 151, IRD-AMU). His research focuses on individual and family strategies to adaptation and survival in various precarious urban and rural contexts (child labor, migration, multiple residencies, prostitution), and social protection policies in Andean countries (Peru).

Frédéric DÉCOSSE is a sociologist in charge of the National Scientific Research Center connected to the Labor Sociology and Economy Laboratory. His work focuses on temporary migration programs, the health of agricultural migrant workers, and the immigration struggle in the Mediterranean and in North America.

Kamel DORAÏ is a researcher at the CNRS (the French National Center for Scientific Research). He has been based at the French Institute for the Near East (IFPO) in Amman, Jordan, since September 2014. He has been conducting research in Lebanon, Syria, and Sweden since 1996 on different refugee groups, collecting biographies, migration trajectories, and stories of urban mobility. He was based in the IFPO in Damascus (Syria) from 2006 to 2010. His work focuses mainly on asylum and refugees in the Middle East, new migrations and geopolitical restructuring in the Middle East, and migration and transnational practices within the Palestinian Diaspora. The comparative study of refugees residing inside and outside of camps as well as the analysis of their migratory experience and spatial practices provide an account of the refugees’ socio-spatial dynamics in exile and of relations between the camps and their urban environment.

Mustapha EL MIRI is a Senior Lecturer in Sociology at Aix-Marseille University. His latest research revolves around migrations and their social effects in the Mediterranean basin. His most recent studies in the same field analyze the social qualification of migrants in their home countries undocumented migrants’ beginning and integration modes, and the transformation of relationships at the border and during migration in transnational areas that are part of economic globalization (in the Hispano-Moroccan case).

Alfredo HUALDE is a sociologist at the Colegio de la Frontera Norte in Tijuana. He is a tier-3 member (highest level) of Mexico’s Sistema Nacional de Investigadores. His research focuses on the mobilization of knowledge in many industries at the Mexican border (electronic maquiladoras, aeronautics, software) and the role played by various actors and institutions in the recognition of this knowledge: educational centers, companies, and their own topics. His methodology prioritizes longitudinal perspectives, especially the study of professional trajectories.

Carolina KOBELINSKY is an anthropologist in charge of The National Center for Scientific Research with the Ethnology and Comparative Sociology, at Université Paris Ouest Nanterre La Défense. In her research, she focuses on migratory and asylum policies from an ethnographical approach. Her latest research revolves around the dead at the southern border of the European Union.

Hélène LE BAIL is a researcher in international relations and political sociology with the International Research Center at Sciences Po, Paris. Her work analyzes contemporary mobility to and from China, as well as Chinese migrants’ forms of mobilization to Japan and France. Her most recent research focused on migration through marriage between China and Japan.

Ariel MENDEZ is a Professor of Management Science at Aix Marseille-University. Her work focuses on organizational dynamics while integrating institutional and time-based approaches. Her most recent research revolves around the re-structuring of work standards and skills involved in the globalization process, especially for skilled workers.

Delphine MERCIER is a sociologist (CNRS Research Director) at the Laboratoire d’Economie et de Sociologie du Travail (Institute of Labour Economics and Industrial Sociology) in Aix-en-Provence. Her areas of research are migration and international labur markets in the global South, globalization, free industrial trade zones in Latin America, Europe, North Africa, and the Middle East, international management systems (standards) and local governance in the face of environmental and global issues.

Michel PERALDI is a sociologist and anthropologist with the IRISS/CNRS/EHESS in Paris, where his work focuses on cities and migratory circulation, the emergence of transnational worlds in the heart of local society, and the economic, informal, criminal or legal forms of this emergence. He has also studied the “suitcase trade” and the loci of informal trade that represent its logistical “platforms”: Tangier, Marseilles, Istanbul, and Naples. He has lived in Morocco for 10 years, where he has done ethnographic studies on sub-Saharan migration and a three-year study on Europeans who give their lives the shape of a migration journey.

Betsabé ROMÁN GONZÁLEZ is an associate researcher in El Colegio de Sonora, México, specializing in migrant children, teacher education, and children’s social integration. She studies and documents the multiple back-and-forth movements of children between the United States and Mexico. She is member of Mexico’s Sistema Nacional de Investigadores.

Cyril ROUSSEL is a geographer currently interested in the transformations of trans-border space and urban spaces in relation to an increased circulation of people and trades in Middle East and the re-adaptation of these flows within a context of conflict. He works as a researcher with the CNRS and the Migrations Internationales, Espaces et Sociétés – MIGRINTER laboratory (International Migration and Laboratory, Spaces and Societies).