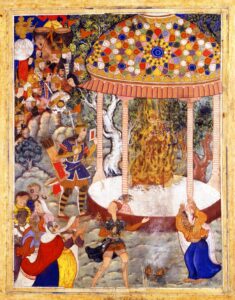 Hamza Burns Zarthust’s Chest and Shatters the Urn with his Ashe (1570), (on cotton tabby from a copy of the Hamza-nama. David Collection Museum, Denmark).

The Mazdean religion, also known as Zoroastrianism, is one of the world’s oldest surviving religions, dating back to the 2nd millennium BCE, before the immigration of the Iranian tribes from Central Asia to the Iranian Plateau. This religion reveals the constant struggles between a creator god known as Ahura Mazda, protector of Light and Order, against Aŋra Mainyu, the god of Darkness and Chaos. The center figure of this religion is the prophet Zarathustra whose name is first mentioned in the Gathas, the oldest religious recitatives of this religion. Throughout centuries, this religion has been practiced in all corners of the Persian Empire and the Iranian world, from Sogdia to Media. In 651 AD, the Sassanid Empire came to an end after the Arab invasion of Persia. This is later followed by the retreat of the Byzantine Empire from the areas of northern Iraq and Eastern Anatolia, which consist of today’s greater Kurdistan (Iran, Iraq, Turkey and Syria), in favour of the Muslims. Over few centuries, Zoroastrianism, which was once the state religion during Sassanian Dynasty, became gradually replaced by Islam. Consequently, Zoroastrians became a minority in the former Persian Empire, Eastern Anatolia and Northern Iraq.

While relatively large Zoroastrian communities still exist in Iran and India, a number of Kurdish Zoroastrians remained hidden from the public until the official recognition of Zoroastrianism in Iraqi Kurdistan in 2016. With access to the archaeological sites such as Char Sten temple outside of Duhok, and the recent discovery of Anahita’s temple in Jar Sangi, as well as newly revelled Zoroastrian manuscripts (as the result of the Kurdish Zoroastrian community’s resurfacing), we could assemble puzzle pieces in order to expand our knowledge about this community, outside of the usual Iran and India.

The purpose of this international conference will be to provide a multidisciplinary approach by combining historical studies, archaeology and philology, in order to contribute to the study of this ancient religion, ideally outside of modern Iran and India. Nevertheless, this purpose cannot be achieved without taking into consideration and a side-by-side comparison of the data from the long-standing tradition of the mentioned disciplines, collected from Iran, India and other related regions.