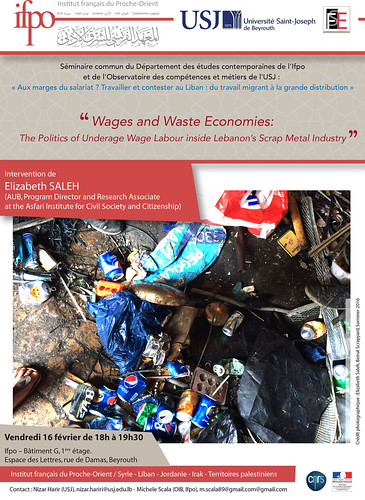 In this presentation, I draw from ethnographic fieldwork with a network of underage Syrian waste pickers at a small scrapyard in Beirut, to examine the politics of informal waged labour within economies of recycling. Lebanon is a country with a splintered waste management system where there is also an absence of any clear implementation of environmentally related industrial policies. Yet scrap copper and iron are two of the country’s leading exports. Profit making in the industry requires the movement of material through export. At the same time, this so-called circular economy relies heavily on undocumented, including underage migrant workers. Since the Syria conflict, many Syrian forced migrants are seeking to establish themselves within networks of the scrap trade. Many have self-organize within the scrap industry’s informal economy and sell their findings onto large scrapyards. There, metal bought at negotiated prices subject to the fluctuations of global markets are further broken down in preparation for shipment. By reflecting on market price performativity in an industry where very few relied on the paces of regular wages, this paper intends to reflect on some of the social and political conditions under which young waste pickers are remunerated, manage their money and debt and send remittances back to family in Syria.

Elizabeth Saleh is a Program Director and Research Associate at the Asfari Institute for Citizenship and Civil Society. She works in the fields of political and economic anthropology. She obtained her PhD in Social Anthropology from Goldsmiths, University of London. Her doctoral research examined the entrepreneurial strategies of the wine industry as they converged in the Kefraya region of the West Bekaa. In 2015, Elizabeth commenced a new ethnographic study examining the reconfiguration of Syrian labour at the interface between Beirut’s formal and informal economies. Most of her fieldwork takes place at a scrapyard in a working class neighbourhood in Beirut, where she explores the effects of the Syrian conflict and the policies of the Lebanese state toward migration, labour and waste management in relation to the prosperity of the scrap metal industry.