The socio-economic transformation of a village into regional capital of the Bronze Age: genesis, splendour and decline of Qatna 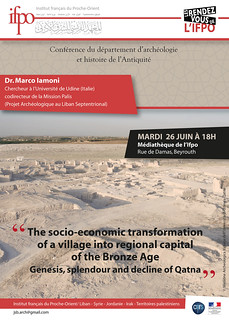 Qatna has been one of the great regional capitals that dominated the political landscape of a large portion of second millennium BC Western Syria / Northern Levant. Archaeological investigations carried out in recent years by a joint project of the General Directorate of Antiquities and Museums of Syria (DGAM) and the University of Udine have demonstrated that the settlement started during the 3rd mill BC as a small village that grew rapidly at the end of the Early Bronze Age and eventually became a massive urban site of 110 hectares. Via an analysis of the excavated contexts as well as of the material culture collected during the excavation, this talk will illustrate the path followed by Qatna during its transformation from village to mega city of the Middle and Late Bronze Age until its decline at the end of the second millennium BC.