Rabbot-Ammon in the Iron Age

Rabbot-Ammon, literally “The Great (City) of Ammon,” was the capital of the Iron Age kingdom of Ammon, which arose at the beginning of the Iron Age II period (1000 – c. 600 BCE) on the central plateau of Transjordan. The Jabal Al-Qalʽa, located in the middle of the modern city of Amman, is the impressive testimony of this early royal city. Its building structures, however, are invisible to visitors today since they are located in the layers below the Omayyad and Roman ruins. In the 8th and 7th centuries BCE Rabbot-Ammon enjoyed economic and cultural prosperity. This is evidenced by monumental buildings and luxury objects, such as seals, jewelry, and glass vessels found primarily in tombs around the Jabal Al-Qalʽa. Many of these were imported from the Assyrian heartland. These finds demonstrate Ammon’s supra-regional integration into the Neo-Assyrian network. The monumental stone statues of Ammonite rulers and gods found in Rabbot-Ammon and its surrounding area are furthermore an impressive evidence for the representation of the Ammonite kings.

The lecture will give an overview of the archaeological and historical testimonies of Rabbot-Ammon as one of the earliest kingdoms of Transjordan and will address the supra-regional importance of the city in the Iron Age period.

Katharina Schmidt has been director of the German Protestant Institute of Archaeology (GPIA) in Amman since 2016. Her main research interests centre around the archaeology, and Jordan’s cultural heritage. Her current habilitation project is dedicated to the analysis of Iron Age sculpture from Jordan and the question of the “formation of elites” in this period. Since 2016, she has been leading the excavations on Tall Zirā’a, where she focuses on the settlement history and stratigraphy of the Iron Age period.

Katharina Schmidt studied Near Eastern Archaeology, Assyriology and Pre-and Proto History at the Ludwig-Maximilians University (LMU) in Munich and at the Sorbonne in Paris. In 2016, she was awarded her doctorate at LMU with a thesis on glass and glass production in the Iron Age period. Katharina Schmidt has worked on excavations in Syria (Tell Halaf) and Turkey (Sirkeli Höyük, Dülük Baba Tepesi). 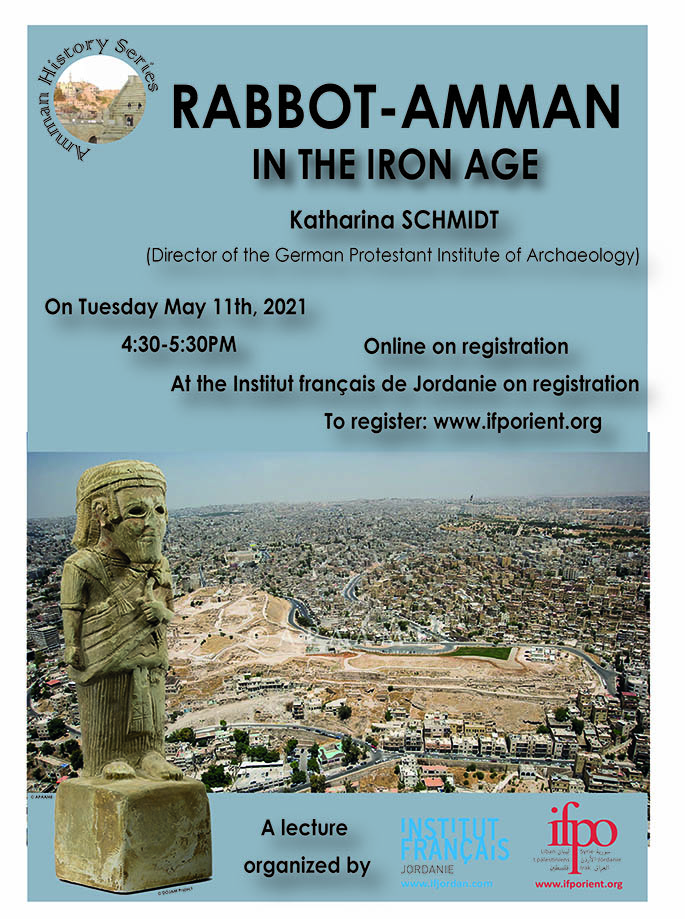 For the centennial of the Emirate of Transjordan, the French Institute for the Near East (Ifpo) and the Institut français de Jordanie (IFJ) are organizing a series of seminars/webinars on the little-known history of Amman, from the first forms of human occupation to the contemporary period.

In nine lectures, aimed at a large audience, international specialists from the ancient, medieval, modern and contemporary periods will present the history of this city. From the statues of Ain Ghazal to the Roman Philadelphia; from Rabbath Ammon to the sack of the city by the Mongols, from the Ottoman refoundation of Amman by the Circassians to its establishment as the capital of the Emirate of Transjordan under the British mandate, this series of lectures will revisit the long history of the foundations and refoundations of Amman, its development, its regional influence but also the history of its populations of multiple origins. During the last century of history, the capital became a political and economic space on a national and international scale. The rapid expansion of the city, due in particular to the reception of different waves of refugees, and the development of urban policies have made it a central crossroads on different scales.