The Crime of Writing : Narratives and Shared Meanings in Criminal Cases in Baathist Syria 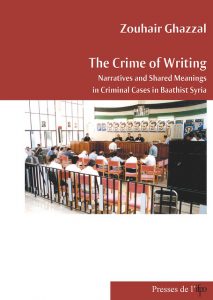 From the primal scene to the crime scene 6

Chapter 1. The political economy of crime 35

Chapter 2. What would stand as enough evidence? 101

Chapter 3. There is no crime where there is madness 143

Chapter 4. Auto-biographies: Self and Other in Confessional Criminal Narratives 195

Chapter 5. The death penalty, torture, and due process 245

Chapter 6. The problem of recipiency in honor killings 317

Chapter 7. When punishment is left to the judiciary: Kin wars between shared meanings and law 365

Chapter 8. A danger to society: they must therefore all disappear 391

Chapter 9. The place of third parties in land crimes 435

Chapter 10. Photoshopping the president: Men at work in the age of socialism 479